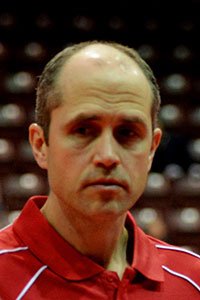 Scott has a long history of volleyball in Canada and around the world as both a player and a coach. He has been involved as a player and coach at the Provincial, National and International levels.
As a player, Scott was a member of the National Men’s Volleyball Team from 1995-2007. He played 326 matches for Canada over a 13 year career while serving 6 seasons as team captain. He has also played 10 professional seasons for teams in Spain, Austria, France, and Qatar. A graduate of the University of Manitoba, Scott captured 2 National Championships, was a 3 time All-Canadian, National Player of the Year, and a University of Manitoba Athlete of the Year during his 5 seasons with the Bisons. In 2009, Scott was inducted into the Manitoba Volleyball Hall of Fame.
As a coach, Scott served 2 seasons as an assistant coach with the University of Manitoba Bisons before moving on to become the full-time assistant coach for the Team Canada Women’s Volleyball team from 2010-2015. He is still involved with the Senior Women’s program as a coach and this summer will serve as head coach for the Junior Women’s National Team for the third time. Scott is a lead coach and contributor in the Volleyball Canada Centre of Excellence (VCCE) program.
In his current role as Provincial High Performance Coach for Volleyball Manitoba, he oversees all levels of volleyball programming in Manitoba.